According to Kera's [and other's] comments, I may have some explaining to do.

. . . . "why the freak would you EVER run 20 miles on a treadmill? Don't you live on planet earth where you can just go outside?"

It all started with a doctor's visit in February 2009.  [Cliff Notes version].  "You either run on a "forgiving surface" or you won't be running at all in 5 years time."

So, off I went four to five times a week to LA FITNESS to run.  By September, I had received enough disapproving looks and comments from fellow gym go-ers, that I bought this little beauty. 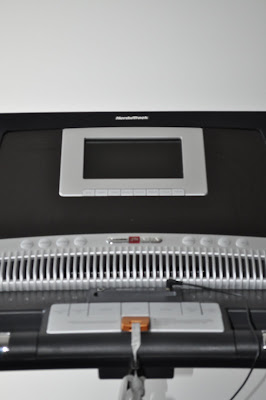 [side note:  have yet to figure out how to make the TV work - we have satellite - from what I can gather, we'd have to buy a new satellite box JUST for my little "ed" - not going to happen.]

I did move my treadmill 180 degrees.  Yippee!  So now instead of looking at this.  I see a plain [all] white wall.  awesome.

While this is the [running] life I've known and HAD to accept for a while now.  I had no idea how "weird" it was to run 99.8% of my total miles on one until I called Runner's Den [store] one day in early January.  I was having a lot of knee pain and wanted to know what types of braces they sold.  We chatted.  He asked a lot of questions.  Then he asked THE question.

Anyway, had to end up going to the store to buy a brace.  When I walked in .... .... it was hilarious.  The man had told everyone in the store and the employee's had all sorts of crazy questions for me.  Where is it?  How far do you run each week?  Do you watch TV?  Do you really think that's good training?  No group running?  Don't you miss the "fresh air"? 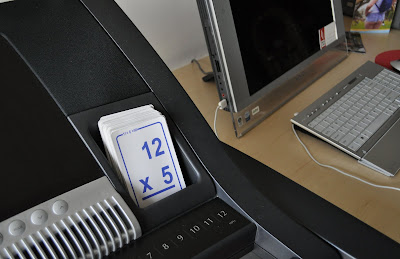 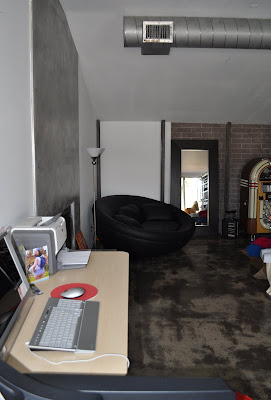 Your treadmill love makes me happy! Most of the year I do 3 of my 4 weekly runs on mine. Everyone thinks I am crazy, but I often have no other choice. I've only done 12 miles on mine. But I wouldn't rule out going longer!

Love the pro/con list! I can see both sides of this argument. I prefer to do my 3-8 mile runs on a treadmill and especially my interval runs. I can control my speed increase and decrease way easier on the treadmill! And how fun that you can help your peanut with her multiplication! Family time is the best, and if the treadmill allows for more of that then awesome!! i never do long runs on the weekend because it is my time with my Little Buddy (and not to mention the hubs is deployed so i have no other choice). I often daydream about a treamill in my too-tiny house. That would be nice.

Ok, this comment is way too long....keep up the good treadmill work! I am impressed. Now, can you attribute those abs to the mill? If so then I am SOLD! =]

I just wanted to tell you that I went for my first run today in ages thanks to you! I kinda gave up running after I got chased through the local park in our shady london neighborhood, but all your bragging about running tons of marathons had me feeling like a fatty so I finally got off my ass! It felt great! Thank you!!!!

(oh and you could add that to your pro list - no chance of getting chased by creeps!)

I'm not sure I could live without my treadmill, we were bff's over winter! Thanks for the blog stop-by and well-wishes. Good luck with Whiskey Row, look forward to following your journey!

Okay, okay...you've got me convinced. I might just have to get a NICE treadmill to run on. I think mine is WAAAY too old. I love how positive you are about it. You're really motivating! :)

I run all of my long runs on an indoor track for the some of the same reasons. Water,bathrooms, weather, soft surface for my poor hips and ankles, and childcare is included. I never, ever run with anyone else, I thinks it's weird, I wouldn't know how to do that.

Just found your blog and all I can say is, "WOW!" about the treadmill running. That is some freaking dedication and you should be proud.

I am so thankful for my treadmill. It is old and busted looking but its in front of the computer so I can watch Lost on hulu.com and I feel safe there!
Sharin' the treadmill love!

You sure make a great sales pitch for the treadmill! Still not for me, but I admire your dedication and your willingness to do what you have to do (even running in place toward a white wall for 20 miles...) to keep at it. You go girl!

So glad you found my blog!! Wow! I'm amazed, but love hearing it from your perspective. I'm also slightly jealous of the fan on your backside.

great perspective! i am definitely going to train more over the next 6 months on the treadmill. last fall when i trained for my first marathon, i got the worst itb injury from cambered roads and the same hilly route over and over. i am totally going to add more flat and soft treadmill this time. hoping it's one of the keys to helping me train injury free this time!

thanks for stopping by my blog. :) i loved reading some of yours!!

If you can stay distracted the treadmill is a good workout. When you're just staring at the wall like me it kinda sucks. I love those that have their own personal TV. I can get distracted and even run a couple extra miles that weren't intended with one of those!

Thanks for coming by my blog :)
Totally enjoyed reading your post. Although I prefer running outside, I'm not averse to treadmill runs...especially during our crazy winters.

All I can say is Wow! Longest I have done on a treadmill is 12km and I even had a TV to keep me company and I thought I would go insane. I still like using the treadmill if it is really bad weather out and don't have a hate on it like others do.

i laughed at the TV no working comment. great idea... now only if it would be a great idea that would work! haha